You see it everywhere, but you don’t know much about it. It’s the WordPress featured image. Let’s find out more about it.

You undoubtedly know that every physical magazine depends on images. Before these magazines went online, the editors made use of visual media to make sure that people are enticed to read the stories.

Now, before you even begin questioning how important images are, ask yourself, how much would you like your favorite magazine without one? Would you be as interested as you are now if there were no images of your favorite car, or food, or fashion?

WordPress featured image is a feature that’s fairly popular, and most of today’s themes have support for a thumbnail image or featured photos when you’re adding a post. A featured image has the goal of showing the content, or theme, of a post or page.

There are multiple variables for a good featured image. For example, there isn’t a predefined best size for featured image in WordPress, so it depends on your specific case. The WordPress thumbnail size should also be sufficient to display the image properly, and users should be able to see what the image is from the thumbnail.

What is a featured image?

Even though you might be inclined to think this is just another media file, the image for the thumbnail post does deserve special attention, as this is what you’ll use to grab your visitors’ attention. This is what you’ll use to attract individuals towards reading your stories, as well as boost your blog’s visual quality. And, it also plays a fairly crucial role in social media sharing. Therefore, this image’s importance mustn’t be neglected.

You will find that not so long ago, many of the popular WordPress themes didn’t have support for a featured image, and it wasn’t as simple as making WordPress get featured image you like and put it on your post. Even those few who had featured images, tended to face issues such as the WordPress featured image not showing etc. However, times have changed, and most of the themes available online are ready for featured images.

Where do they appear on your site? 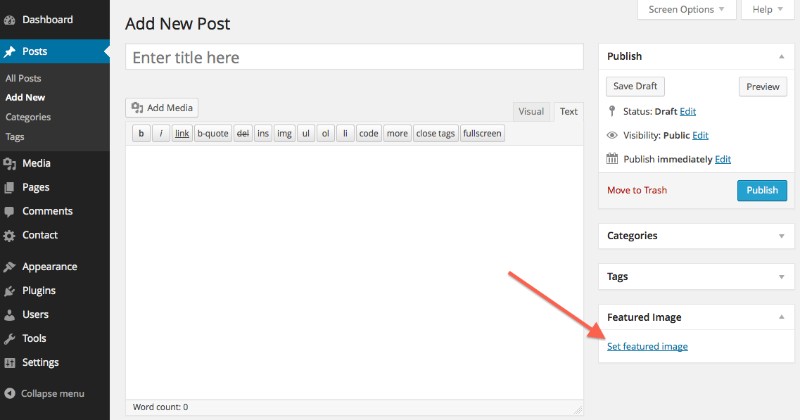 The featured images tend to live under your homepage’s spotlights. They’re the thumbnails that represent the whole post, and they usually link to the post directly. When you select a featured image, you’re setting your story’s entire tone. And, just like a good photo may tempt a visitor into reading the entire post, a bad one can put them off entirely.

Those same featured images commonly appear at the top of single posts, as well as pages and custom post types in WordPress. Depending on which theme you’re using, the featured image may appear a bit below, or above the title. The WordPress featured image size also depends on the theme, and is usually up to the developer who worked on the details.

Now, again depending on the theme, you might have featured images elsewhere. For example, if you have a recent posts widget, it might show post thumbnails for a bit of style, and to attract a bit of attention. Some will even show the images in the admin pages, next to the assigned posts.

Let’s take a look at a few tips and tricks for featured images.

How do you display featured images in single posts?

You will need to find the theme file that renders those individual, single posts. This file is commonly called single.php. There’s a while() loop inside it, add the following code to it:

This code will check if there’s an image for the post or page, and then use the “get_the_post_thumbnail()” function to print it. This is how the loop should look like once you’ve integrated the new code:

How do you add a featured image?

This is fairly simple. There’s a built-in option to make WordPress display featured image, and it’s on the right-hand side of the screen. If you don’t see it, make sure you have checked the “Featured Image” box in the “Screen Options” tab in the top-right corner.

On a fresh site, the Featured Image tab is at the bottom of that right sidebar. Just click on the “Set featured image” link, and a new window will open, your Media Library. Just choose any image you have on your website already, or use drag and drop to upload a new one from your computer. Once you’ve made your choice, click “Set featured image”.

How do you remove a featured image?

When you want to remove your featured image, just open the post or image editor, and click the X icon in the Featured Image module. If you remove it, you will have your custom header image displayed instead.

Besides the featured header images, you will find that plenty of themes also offer support for alternative featured images. These may include things such as post thumbnails, slideshows, and even images attached to featured posts.

But, what if the theme you chose doesn’t have a featured image option?

Even though, as mentioned earlier, most of the themes are ready for featured images, you will find the odd one here and there that doesn’t offer such a feature. There are other ways to add one, either manually, or with a plug in. Below you will see how to do it with any of those methods. The plugins mentioned below are incredible, and you can even use them to let WordPress handle featured images automatically.

If you want to do things manually, things are pretty simple. Go to the functions.php file in your theme, and add the code below:

And you’re pretty much done.

What about using plugins for this?

When you consider the fact that there are over 70 thousand active users of this plugin, it’s clear that many themes still need a bit of extra care when we’re discussing post thumbnails. This plugin lets you add multiple images, so you no longer have to depend on only one that’s commonly available. The plugin will prepare the pictures, and also let other theme functions access them when it’s necessary, without you needing to do anything.

When you need to work with other plugins that need featured images, as well as sliders that display them to your users, this is an excellent choice. And, there’s also a premium version if you want to add a few other functions as well.

Quick Featured Images is extremely simple. From the moment you install it, you can go ahead and put everything on autopilot. It lets you set a default featured image, so whenever you forget to set one, it reverts to the default thumbnail. It also lets you remove or replace images from a number of selected posts, at once.

And, additionally, there’s the option to add a picture in a sortable image column, in lists of pages, posts and custom post types. You will also find filters and rules to modify the way your site handles post thumbnails. And best of all – it’s free!

Featured images are among the most important media files you’ll have on your blog. Therefore, having them look good is more important than you might think. Sure, having a nicely generated computer image or a beautiful photo is essential, making it look as good as you can is really something you should do.

Fortunately, you don’t need to be a developer, or to have a complete understanding on WordPress’ image processing for this. All you need is a small code snippet, or a simple plugin, and we hope that the guide above helps with this.

If you enjoyed reading this article on how to add WordPress featured image, you should check out this one about how to reset WordPress.

504 error in WordPress: How to fix it

504 error in WordPress: How to fix it